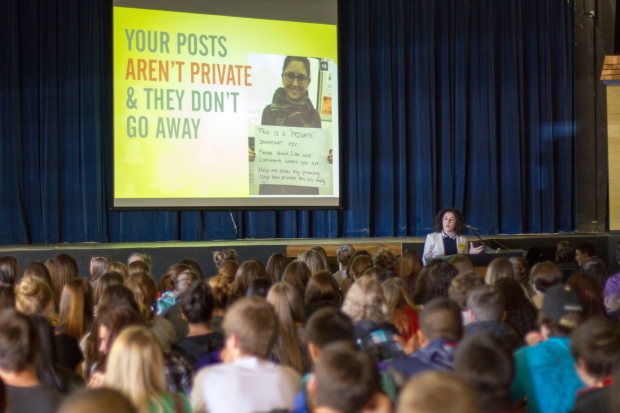 Last week, I had the pleasure of talking to about 300 sophomores at West Albany High School about how their use of social media would change after they left high school.

We use social media to communicate and stay in touch with friends and family, and to express ourselves online. But many high schoolers aren’t aware that after they leave high school, social media will take on a new facet. Universities and employers will begin using social media to investigate prospective students and hires to ensure they’ll represent the school or company well.

When it comes to universities, scholarship committees and team recruiters will also be on the lookout. There are countless stories of student athletes losing scholarships over social media gaffes, but the most eloquent comes from Marymount University’s Coach Brandon Chambers:

Anyone born after the 1980s is often described as a “digital native,” especially the kids who have grown up with iPhones and Twitter. But being digitally fluent isn’t the same as being digitally literate: just because young adults know how to use these social platforms doesn’t mean they’re fully aware of potential consequences, both online and off.

This is one reason why social media education is important. When I talked with WAHS students, I asked which platforms they were using. Almost every student in the room was using one social channel (or more). Social media education can help students start to understand how their social use reflects their offline lives and can potentially avoid mistakes that cause them to lose their jobs or become the subject of an online smear campaign.

The other reason social media education is important is to make sure that students who may not have access to social channels can learn about them. Not every job in the workforce will require employees to have a Twitter handle or an Instagram account. But these tools are increasingly being used in businesses, and they’re important skills for the next workforce to learn.

But it’s important that social media education isn’t just about the fire-and-brimstone side of social use. Attempting to scare teenagers doesn’t get them to stop doing something; it’s more productive to illustrate positive uses for social channels they may not have considered.

When speaking with WAHS students, I showed them ways to harness social media positively when looking for a job or showcasing their creativity. Though landing a gig with Instagram isn’t guaranteed, it’s not outside the realm of possibility: success stories like Michelle Phan and J. Clark Walker exist for a reason.