I’ve been glued to Al Jazeera’s live feed of Cairo all day, checking Twitter’s #Jan25 hashtag for updates. Protests began earlier this week and, despite Egypt shutting off mobile and internet service, increasing numbers of people came out today. They took a break to pray, despite being hosed: 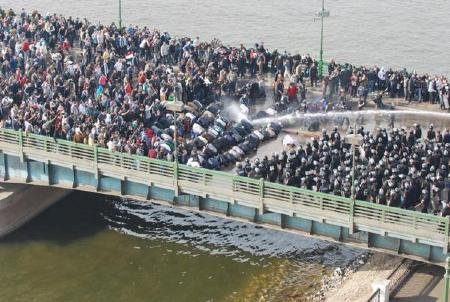 This powerful image was distributed on Twitter by Olly Wainwright.

A curfew was imposed and the police and military were called out, but none of this stopped the protesters.  Several people have died and hundreds have been wounded. But the protesters march on toward ousting Hosni Mubarak and his police state.

I pray for Egypt, like I prayed for Tunisia. I also pray for the safety of friends and  Muslimah Media Watch contributor Eman Hashim, our correspondent in Egypt, who is participating in the protests.